CLICK HERE TO FIND A PERFECT ESCAPE ROOM FOR YOU!
Home > Home > Choose your ER wisely

How to choose escape room? 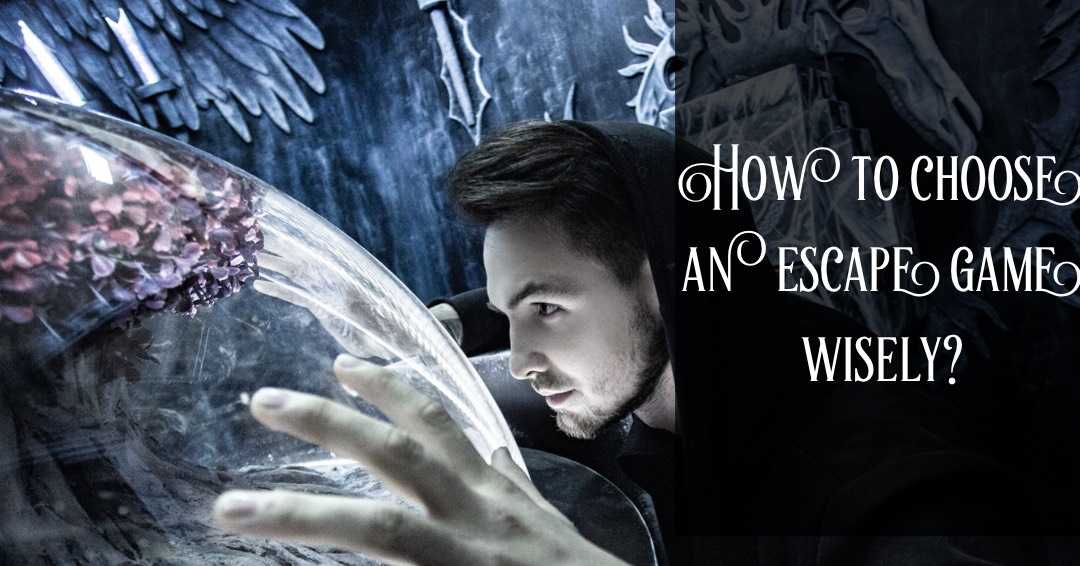 According to statistics, we spend 10 full years of our life at work, 8 years shopping, 9 years watching TV and 125 days shaving. The list goes on, but the meaning is clear: we do not have time to waste on entertainment of dubious quality. For that reason, I want to share my advice on how to spot The Room out of a multitude of escape rooms, The Room that will bring you happy memories for a long time.

The escape room industry worldwide is rapidly growing, but I can tell you that there are only so many escape rooms worthy of your attention.

So how do you avoid mistakes and choose just the room you need?

Think about your game partners. Will it be your significant other, a group of friends or colleagues?

The choice of a layout and environment depends greatly on who you will be playing with. However, if where you live it is common to play with strangers, skip this step.

Things to keep in mind when browsing photos and reviews.

There are two types of reviews:
⏺Reviews posted by aggregators. Generally, these are written by an experienced team or a solo reviewer with more than 200 games under their belt. Usually, their reviews are unbiased and to the point, however, if you are an escape room newbie, such reviews may have a dramatically opposite effect. An experienced player is not easily surprised by the feel of the room or quality of puzzles, while the feel or the chance to win without getting stuck solving tricky puzzles are important for many beginners.

There is another issue with professional reviewers: their personal relations with the escape room owners. Keep in mind that escape rooms often reward reviewers for visits and kind words, in addition to letting them play for free. Or it may be the other way round – the reviewer might have felt snubbed by the escape room personnel. These are minor factors that still have a tremendous effect on the final review.

⏺Player reviews. Unfortunately, most of them cannot be trusted. Stellar reviews are usually submitted by posters linked to escape room owners, while one-star reviews are often written by rival rooms. Most of the time you can spot such reviews quite easily. Just keep it in mind when you come across a glowing review or a review with a lot of negativity.

✔️Photos: things to look for
If real photos are available, you can use them to gauge the expected quality and enjoyment level. In some countries it is generally accepted to share photos made during the game, while in other countries it is a rare thing. For example, it is uncommon for escape rooms in the USA to share real photos from location. In my opinion, the reason is that the first escape rooms had very low budget and real photos did not help to sell them. Of course, the quality of rooms has grown over time, but the habit remains. The situation is different in Russia, where you can make accurate predictions of the room’s quality from a couple of real photos.

These rules apply for all online platforms, be it TripAdvisor or a room’s dedicated website.

Where to look for a room? Most of the time, it narrows down to one of the following:

• Aggregator sites with escape room ratings
Keep in mind that an aggregator is an online platform that promotes escape rooms. The owners of these rooms do not need a huge marketing budget: the aggregator takes care of that. At the same time, aggregators sell top positions in the rating even if they deny it (in fact, they often do).

Top positions in the ratings are not always occupied by the best escape rooms, but often by those who are skilled in using the aggregator’s marketing tools or communications. That is the flip side.

If you go to TripAdvisor-Moscow for example and enter “escape rooms” in the search field, the first entry will be a picture of a red button by Cubiculum. This company runs 3 locations and their rank is not a testament to their quality. The recipe for this success is that they were one of the first English-speaking escape rooms to open in Moscow and that made them number one among English-speaking reviewers.

I had a go at this escape room, meaning no offense. It turned out to be a second-generation room; most of their puzzles were paper-based calculations, and half of them were not working; the administrator left much to be desired. Compared to a multitude of escape rooms in Moscow, they definitely do not deserve to be considered as one of the best. On the contrary, that room was far behind in quality. That said, one of the three rooms run by this company is really good and that also helps. I can give a lot of such examples here.

• Coupon services
It should be noted that escape room owners are not fans of coupon services because they generate “bad” customer flow. Personally, I would stay clear of the rooms advertised on coupon sites. Usually, these are unpopular escape rooms desperate to attract visitors just to reach the cutoff rate of return.

There are exceptions though – sometimes brand-new escape rooms need to generate customer flow to get their business started, even at the minimal price.

• A new escape room from the company that you know
This makes matters easier. Generally, if it is a newer escape room than the one you played, everything will be fine. My advice: do not be shy, call the game masters and talk to them. They will give you recommendations for the next room to play, if you are a returning visitor.

• Recommendations from friends or reviewers
If your friends recommend you an escape room, compare your preferences. Say, friend A is a fan of horror, and Friend B cannot live without romance, but if you like horror, then listen to Friend A, obviously. If you read professional escape room reviews to select the next game to play, trust your own experience: the more games you played, the more useful their recommendations and ratings will be.

Play more rooms. The more, the better. Choose your next room wisely to get the most out of your experience.

What lifehacks do you have to choose just the right escape room?

Rating: 4,4
return to blog
Do you currently own any escape rooms?
Yes
Not yet
Which themed Escape Rooms do you already own?
Size of the space avalible for the Escape Room
Which theme of ER are you interested in?
Adventures
family
fantasy
film
historical
horror
Where are your ER located?/ Where do you expect your ER to be located?
city centre
shopping mall
city outskirts
residential
Population number in your city
< 50k
50-100k
100-300k
300-500k
What is your budget for Escape Room?
< 10000 $
10000-20000 $
20000-30000 $
> 30000-50000 $
Leave your contact information and we will send you a personal offer according to your needs
May the force be with your application
Fields filled in incorrectly:
The field "Phone number" is required.
PREVIOUS STEP
NEXT STEP